Cloudy With a Chance of Dreams Coming Through 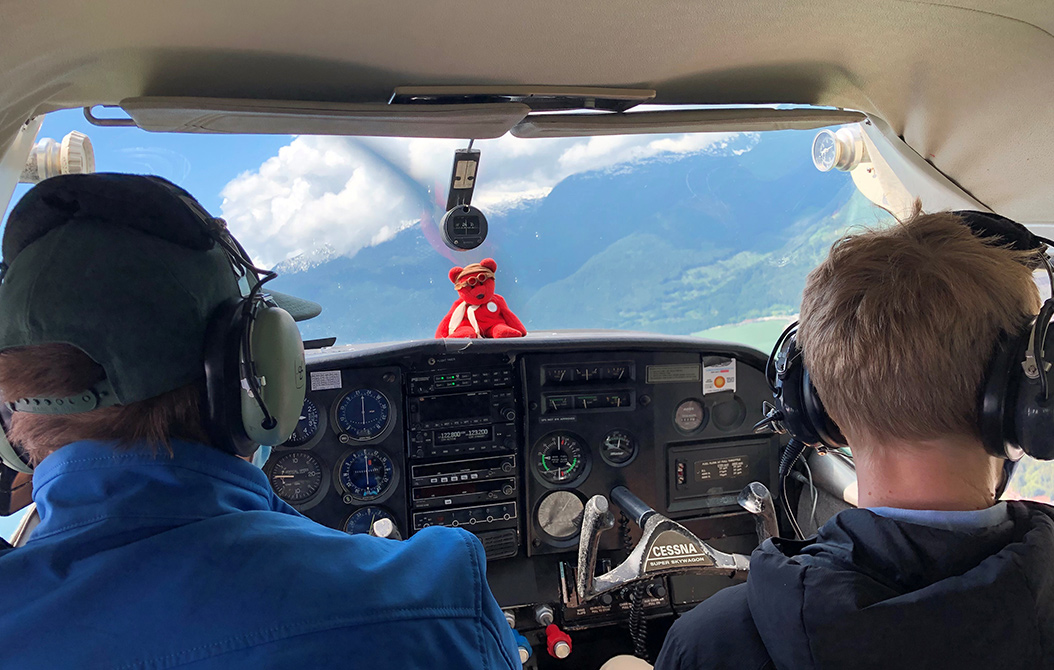 The big day was upon us. Finally, we were able to complete another course of Camber’s Aeronautics programme with Coast Mountain Academy Students. After six modules of the theory of flight, aircraft engineering and passenger cabin design workshops and Paper Plane Contest, we organised a special field trip for 36 students and their teachers. The highlight of the day, no doubt, was taking them flying. The only problem was the weather. It looked like it was going to rain.

The day dawned cloudy and foggy. Not ideal for any school field trip, but especially not much fun when you’re going flying. Clouds roll over the faces of Camber mentors too. After all, they were super excited to see their young mentees again, because they dearly remember how great this year’s class was.

After a set of experiential learning workshops where students shaped wing profiles to test in the school’s small wind tunnel, we had a blast with the theory-into-practice part – the Paper Plane Contest. Students designed and built paper airplanes with no glue, no tape, no weights, just a piece of paper to compete in three disciplines: distance, endurance and “coolness” (judged by the students). It was a really amazing event in the university gym. The longest paper flight took almost 30 meters and time aloft was an amazing 8 seconds. The plane designs were also cool as can be, ranging from colourful to multi-ship where a smaller plane would launch in flight from the “mother-ship”. All of this was done to introduce and excite the 36 students about aviation, applying the theories learned in their Science Technology Engineering and Math (STEM) classes into real life.

The students and their two teachers stepped off the bus at Glacier Air into light rain, coming to collect their Prize. Perhaps, it had to do something with their enthusiasm and energy, but the weather quickly cleared  and suddenly there was a blue sky with mountains and snow-covered peaks to be seen. Needless to say, the Camber mentor’s and the pilot’s faces lightened up together with students when the Sun came bursting out of the clouds. The fun could now begin.

Aeronautics on the Spot

The students were divided into two groups. The first group met one of the flying instructors who walked them around a Cessna 206, identifying the parts of an aircraft and reviewing how an airplane flew. They could focus on all that they had learned during the four classes that Camber CEO and an experienced avionics technician Thomas Chatfield gave on aeronautics, aircraft design and the future of flight.

The second group met at TEAAM, where they learned about the not-for-profit society that provides advanced care and medical services to remote locations in partnership with Blackcomb Helicopters in British Columbia. The students were able to receive a briefing on helicopter operations and were shown two of Blackcomb Helicopters.

Ground locations were very inspiring and a lot of interesting questions were raised by students. But, no matter how amusing this part was, we could feel the burning anticipation of the trip’s grand finale – the flying.

Peaks, Streams and One Little Cessna

Students were going to fly in a four-place Cessna 172 flown by a professional flight instructor.  The ones in the back navigated the flight using three-dimensional geo-caching as waypoints, directing the pilot from one waypoint to the next over the ocean and mountains, seeing the glacier and snow-covered peaks, roaring mountain streams and waterfalls from above. The front seat students got to feel the controls and try their hand at flying. Lots of photographs were taken! The little Cessna 172 flew in shifts from Squamish Airport, taking three students on each trip.

The flights were conducted over Squamish, Howe Sounds and the islands and back over The Chief Mountain before returning gently to land at the airport.  Each student was amazed at what they saw – as they normally would only see the ground briefly when flying out of Vancouver Airport for a vacation destination.

On the way back, the blue sky filled with rays of golden sunshine made a perfect setting for a feeling of joy and fulfillment both for students and their mentors. This was an exceptional experience that solidified the student’s understanding of flight, navigation and the incredibly beautiful area that we are fortunate enough to live in. It was a well-deserved silver lining of another cycle of Camber’s Aeronautics programme with Coast Mountain Academy Students. Previous events encouraged one of the students to enroll in professional pilot training after graduation and another confirmed his decision to become an aeronautical engineer. This time, stepping out of a Cessna, one of the female students remarked that she would like to become a pilot and her friend said that aerospace engineering sounds like it would be fun. Mission accomplished.    And what in the beginning looked like a dull gray rainy day, when clouds cleared away, the only thing left was a beautiful Squamish blue sky filled with young hopes and dreams. What a great day it was!